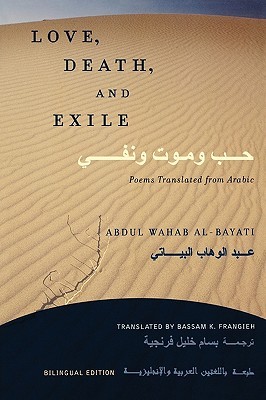 Called a major innovator in his art form by The New York Times, Baghdad-born poet Abdul Wahab Al-Bayati broke with over fifteen centuries of Arabic poetic tradition to write in free verse and became world famous in the process. Love, Death, and Exile: Poems Translated from Arabic is a rare, bilingual facing-page edition in both the original Arabic text and a highly praised English translation by Bassam K.

Frangieh, containing selections from eight of Al-Bayatis books of poetry.Forced to spend much of his life in exile from his native Iraq, Al-Bayati created poetry that is not only revolutionary and political, but also steeped in mysticism and allusion, moving and full of longing. This collection is a superb introduction to Al-Bayati, Arabic language, and Arabic literature and culture as well.On Al-Bayatis death in 1999, The New York Times obituary quoted him as saying once that his many years of absence from his homeland had been a tormenting experience that had great impact on his poetry.

I always dream at night that I am in Iraq and hear its heart beating and smell its fragrance carried by the wind, especially after midnight when its quiet.