Colloid and Interface Chemistry for Nanotechnology Peter A. Kralchevsky 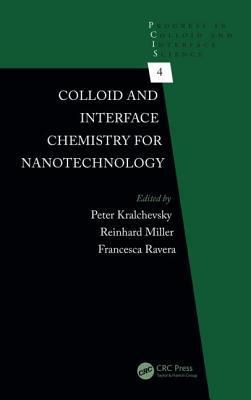 An interdisciplinary field, it bridges the macroscopic world and the small world of atoms and molecules. Colloid and Interface Chemistry for Nanotechnology is a collection of manuscripts reflecting the activities of research teams that have been involved in the networking project Colloid and Interface Chemistry for Nanotechnology (2006 2011), Action D43, the European Science Foundation.

The project was a part of the intergovernmental framework for Cooperation in Science and Technology (COST), allowing the coordination of nationally funded research across Europe.With contributions by leading experts, this book covers a wide range of topics. Chapters are grouped into three sections: Nanoparticle Synthesis and Characterization, New Experimental Tools and Interpretation, and Nanocolloidal Dispersions and Interfaces. The topics covered belong to six basic research areas: (1) The synthesis of nanostructured materials of well-defined size and function- (2) Analytical methods and tools for control and characterization of synthesized nanomaterials- (3) Self-assembly of nanomaterials, such as microemulsions and micelles, and their applications- (4) Bioinspired nanostructured materials structure, properties, and applications- (5) Design of active, soft functional interfaces with unique properties for sensors, catalysts, and biomedical assays- and (6) Nanoscale elements in soft nanoscale devices for applications in analytical and biomedical sciences.This book describes highlights in nanotechnology based on state-of-the-art principles in colloid and interface science, demonstrating how great progress in the various branches of nanotechnology can be achieved.

The application of these principles allows for the development of new experimental and theoretical tools.

Comments
Comments for "Colloid and Interface Chemistry for Nanotechnology":